Yesterday, I ended up attending a job interview instead of Summer Academy, but luckily, I had a kind colleague who was willing to take my three groups of kids.

Today, I wanted to share where my ideas came from this week. As usual, click on the pictures to go to the site. 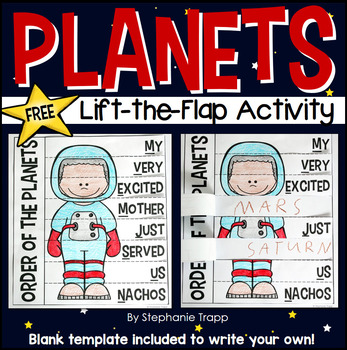 Our pneumonic device was a free product from TeachersPayTeachers. This was such a great thing and really helped some of the kids because they would point to the underlined letter and name the planet. When I printed this, though, I printed them so that they were just half the page, a smaller version.

This project took us two days. We painted one day and cut and put the picture together on the second day. I loved how each kids' pictures looked different based on their paint dots and how they twisted the plate. It really is a neat project.

Space slime sure was a hit this week! This was so much easier to make than I thought it would be. Most of the ingredients I added, but the kids started it with the glue bottles and stirred away throughout. I would definitely do this again with my students.

On Thursday, if I had been at school and not at an interview, we would have made astronaut pudding. Not to worry, we'll still make it later on, but I wanted to provide you with the link anyway.


Have a good weekend.